The Jones' have landed baby!!!!

Good marnin maaaan! It is 7:13am and da sun is shining in beautiful Ocho Rios! 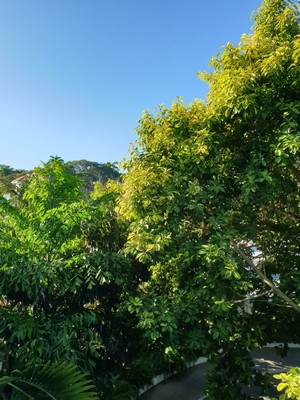 I'm writing about our arrival the morning after because it was the longest day EVER! and we just wanted to sleep when we got here. Plus we have had to force ourselves to sleep a few times due to the time difference from the UK to try and beat the jet lag.

So woke up super excited because we're chasing the sun today! Packed last night for me and Lee and we're ready to go. Traveled to Gatwick airport which was pretty smooth. Great we could use contactless the whole way. Checked in our bags and got a free ice cream! Thanks Virgin! 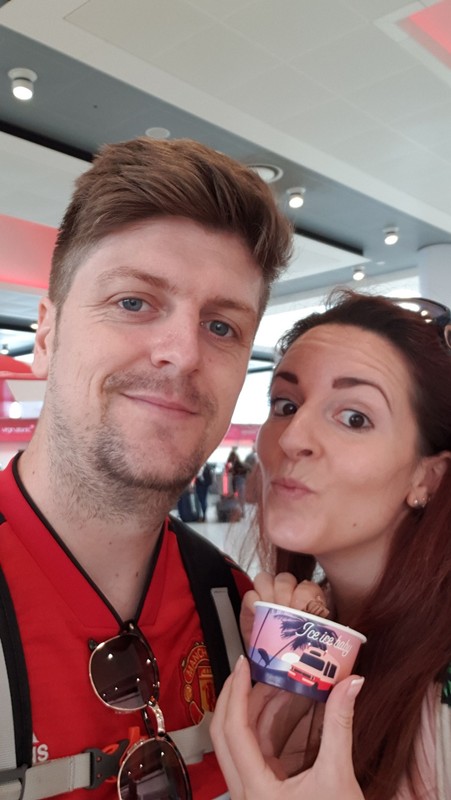 Headed through security which again was seamless. Lee has learned what to put in his bag and what to take out-finally lol. We came across a Superdry store so Lee was like a moth to a flame. Bought himself sliders- to my disgust! The we sat and tried to work out the time difference and when we would call the kids. It was mad to think we were going to gain time travelling and how the sun is not going to go away for hours and hours! This is very different to our mini Europe trips.

We got on the giant plane and Lee was lucky with an empty seat next to him. We were told routine maintenance had to be done then fueling so we sat on the plane for 2 hours before taking off. Lee was thrilled-haha. So flight took off and we watched some movies, played battleship and bowling together and had a short power nap. My right ankle was swollen a little but overall wasnt too bad. We did some mini yoga and walked about a bit so I'm sure it would have been worse if we didnt. Oh-but I had an accident. There was a gentleman in front of me who would make very explosive moves in his seat! He did this just as I was moving a cauliflower curry piece into my mouth... then.... crash bang on my pink top. STAIN!!!!!

THANK GOD my hair as grown because it looked so clumsy -haha. ????

We finally landed in Jamacia! We're 6 hours behind UK so it was 6pm and strange to be light still. The airport is right by the sea and it was warm as soon as we left the plane. Wall of heat. Soooooo lush! We had to have a Visa picture which was hilarious. Lee was serious and mine was 'smile I'm in Jamacia baby!!!'. I LOVE hearing the local accent and dialect, it's such a happy accent. We then met our arrivals team and they kept saying 'yeah maaan vacation starts now!'. And everyone LOVED Lee in his Man U top. So funny lol.

We then had a private bus to the resort which was 2 hours away from the airport. The sun was setting so didnt see much because it was really dark. There are no street lights in the main road. We passed a lot of hotels and resorts and food shacks. Loads of fish places! When we arrived at the resort it was 8pm local time but wer were soooooo tired. The resort entrance was amazing!!!! All open, no doors and windows because it's so warm. They gave us a cold towel and we checked in. Everyone is so friendly it was weird. Me and Lee both said it was all a bit much at that time of day after 14 hours of being awake and from moody London lol. I was worried I needed to tip everyone. Like literally everyone we passed was like 'hey maaan, you enjoying your time?' And Lee stops for everyone lol- everyone!!!!! But we looked it up and there is a no tip policy, they encourage you to leave food reviews for staff to then reward them. I'm going to have to take a note pad and pen around to write their names because everyone is amazing. 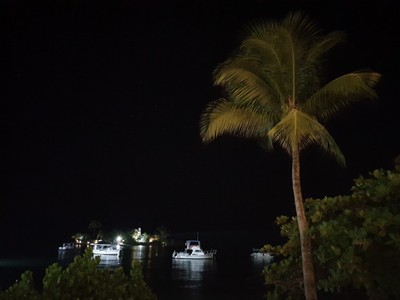 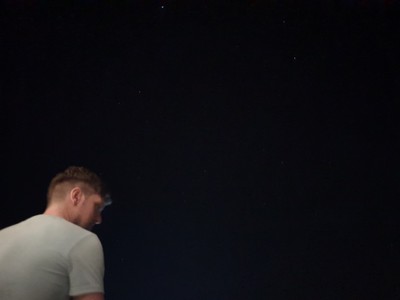 We managed to get the end of the food buffet which had loads of meat and a huge sweet section. It filled a large gap and we headed to bed after ordering breakfast to the room tomorrow. There is also a couples app. Going to download that to sort out our days and evenings out. We're not used to a resort so getting used to the all inclusive and all in one place vibe. Omg the place is massive. We may have to have an orientation of the resort just so we don't miss anything.

So that was yesterday. We have had breakfast now and looking forward to exploring today. Fresh fruit for breakfast was amazing! Haven't had breakfast in bed with Lee so this was a treat. It is 33degrees today and humidity is unreal! My afro is huge hahaha 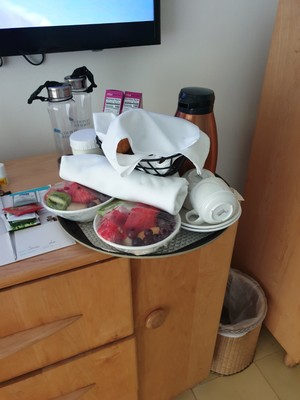 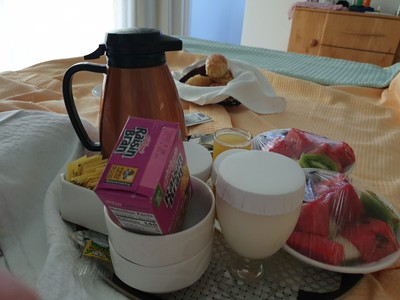 Excited for today! Will update when it's nearly done!

Posted by MrsJonesDiaries 07:22 Archived in Jamaica

This blog requires you to be a logged in member of Travellerspoint to place comments.

If you aren't a member of Travellerspoint yet, you can join for free.